Dawson, New Mexico; a magical, almost mystical place, a place not found except in the memories of those who lived it, a place that no longer exists. It was demolished over a brief summer and all material that made up the town was auctioned off and hauled away.

In 1949 the best football teams in New Mexico were Hobbs, Albuquerque High, Deming, Tucumcari …. And Dawson. Tucumcari had the player of the year in Don Babers who would go on to glory at Oklahoma A&M (now Oklahoma State) and, more importantly, become a four star general. Tucumcari would win the state basketball tournament in 1950 with Babers in charge.

Dawson was the “Miners”. They didn’t have much other than some tough coal miner’s kids. Their lineup would have names with Italian, Polish, Spanish, Russian, and Irish origins. The players were only second generation Americans, paying their way from Ellis Island to the promised jobs in mines of southern Colorado and northern New Mexico.

The 1949 Dawson football season had a schedule that included St. Mikes, two schools from Colorado, Roy, Springer, Clayton and Las Vegas (now Robertson). In the 30s and 40s, Dawson had a more ambitious schedule that would include trips to Hobbs, Clovis, Tucumcari and even Albuquerque and Santa Fe. But the times had taken its toll. The community had shrunk to less than 2,000 as coal was becoming less attractive as an energy source, giving way to diesel, electricity, and natural gas.

The Miners final football game was the traditional Thanksgiving game against Raton. Late in a scoreless game, Raton punted and the Dawson receiver fumbled the ball which was then scooped up by a Tiger who scampered the five yards for the only score. It would be an omen for Dawson. Their last game eliminated them from the undefeated ranks and a chance to claim the state championship.

Dawson was named for John Barkley Dawson, a Union soldier who settled the land and established a prosperous ranch outside of the cowboy town of Cimarron, NM, just 15 miles south. Dawson is said to have heated his house with coal lying around on the hillside. He sold the ranch to a mining concern in 1901. Phelps Dodge Corporation bought and expanded the operation in 1906. In 1913 and again in 1923 two of the worst mining accidents in US history took place. The earlier one killed 263 miners and in the later one 123 men perished.

The town became famous for other reasons though. It was the first school to require a birth certificate to enter school. A new gym was built in the 1920s that was the envy of the state. The mercantile store in town handled goods that could only be found otherwise in Denver or Albuquerque. The community blossomed to over 5,000 in the late 1920s. Housing was provided. The corporation referred to the place as “a camp”, not “a town”, probably because they knew someday it would be closed. They owned everything in town.

In February of 1950 most of the residents motored to Raton, about 25 miles from Dawson. They were there to attend the district basketball tournament, one of ten held from which 20 teams would qualify for the state tournament. On that Friday night a rumor swept through the town, a rumor that started in the local paper. It was a front page story. The Dawson Camp would be closed immediately. All of the employees would be evicted from company housing and left unemployed. Despite the shocking news, the Dawson Miners upset their way to the finals and beat favored Roy, 36-34 for the title and a trip to the state tournament.

They did not fare well in Albuquerque and who can blame them. They were at risk for not having a place to call home. They would beat Santa Fe but lose in the second round to Don Babers and the Tucumcari Rattlers. 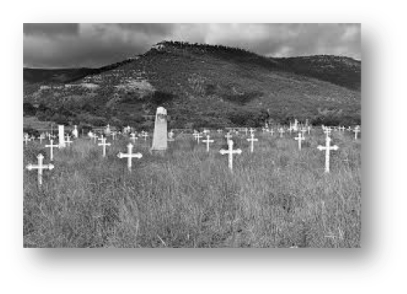 The local miners convinced Phelps Dodge to leave the community open until the kids could finish school in a few months. Then everybody left. The buildings were sold, board by board. Within a few weeks there was nothing left but the foundations. The school and its gym, once the best in the state, the largest retail store in the state, the swimming pool … all gone.

Many would move to Santa Fe and seek other careers. Many great men would come out of the mines of Dawson. Some people voiced a realistic appreciation of the event that caused them to leave to isolated comfort of a company town and go into the world, further their education, expand their horizons and make a better life.

I use the Dawson example when I think of young people who graduate from high school in a small town but refuse to leave, possibly because they are afraid of what is out there.

Today the former residents of Dawson return to the site for a picnic every other Labor Day. The property is now a private ranch owned by out of state investors who use it as a hunting retreat. They allow people in just that once every other year. I went in 2012. Over 500 people were there. They wondered around, remembering where the landmarks were, their house, where they played, where Dad worked. They all have great memories of a time past and an ideal life.

Dawson, New Mexico. All that is left is a cemetery preserved and maintained by those who care, containing hundreds of iron crosses for those who paid it ultimate price for a good place to raise his family. It’s a place and a time that has disappeared from the American landscape … literally.