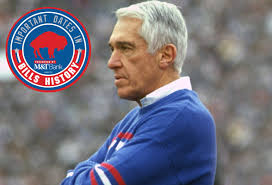 Coach Marv Levy’s connection to New Mexico is when he served as head football coach of University of New Mexcio in 1958 and 1959, after serving as an assistant coach there since 1954.

He was born in Chicago, Illinois on August 3, 1925 and graduated from South Shore High School in 1943.  Following his graduation, he enlisted in the Army Air Corps where he served for the duration of World War II.  Upon his discharge in 1946, he enrolled at Coe College in Cedar Rapids, Iowa where he was a three sport letter winner in basketball, track and football while earning a degree in English literature.  He obtained a master’s degree in English history from Harvard University after graduating from Coe College.

His first coaching job was at the high school level when he was a baskeball and football coach at St. Louis Country Day.  Following this, he began his college coaching career by returning to his alma mater, Coe College, as an assistant and head coach.  He then transitioned in 1954 to University of New Mexico where he was an assistant until being named head coach of the Lobos in 1958.  In his two years as head coach, the Lobos earned a record of 14-6, going 7-3 each year with strong running back and future All-American Don Perkins.  He left New Mexico for California where he served as head coach from 1960 to 1963 before moving on to the same position at William and Mary until 1968, after which he began his professional football coaching career.

Coach Levy served as an assistant coach with the following teams: Philadelphia Eagles (1969), Los Angeles Rams (1970) under Coach George Allen, and again under Allen with Washington Redskins (1971-1972).  His first head coaching position was with Montreal where he served as head coach of the Alloettes of the Canadian Football League from 1973 to 1977.  His overall record at Montreal was 43-31-4.  In his five seasons with the Alloettes, he took the team to the Grey Cup three times, winning the championship in two of them.  Levy then joined the Kansas City Chiefs of the NFL where he was head coach from 1978 to 1982.  His record in Kansas City was 31-42.  Under Levy, the Chiefs showed improvement each year except for 1982 when the season was interrupted by a player strike.  Except for one season in the USFL when he was head coach of the Chicago Blitz, he was on the sidelines in the interim before signing on in 1986 as head coach of the Buffalo Bills at mid season.

In Buffalo, where he would remain for the rest of his career, Coach Levy had his greatest success, recording 112 wins against 70 losses.  During his tenure, the Bills won the AFC Championships a record four consecutive years, 1990 through 1993, earning the team appearances to the Super Bowls, though they did not win a Super Bowl game.

His 154 career wins rank 21st in the NFL, a very respectable place on the list.  His impact on the Buffalo club is quite dramatic.  The Bills have had only four winning seasons in the twenty years since Levy retired.  Their all time record as of 2017 is 414-475.  Without regard to Levy’s wins and losses, the team record drops to 302-405.

Levy now lives with his family in Chicago but makes it back to Buffalo occasionally for Bills games.  He also has written at least four books and feels that he may have more books inside him.  Even now when he is in his 90s, no one doubts that he could do it.

Joe Kapp was a quarterback in the NFL for 4 years after an 11 year career in the Canadian Football League.  His connection to New Mexico is that he was born in Santa Fe, although his family moved to California where he was an outstanding player at the Berkeley campus of the University of California.  His College Football Hall of Fame biography states that he was a first team All-America player, finished fifth in the Heisman Trophy voting in 1958 and led his team to an appearance in the Rose Bowl.  He was team captain of the Bears and was named to the Cal Athletic Hall of Fame.  Kapp was drafted in the 18th round of the NFL draft by the Washington Redskins, but wasn’t signed by the NFL club.  Kapp played in the CFL for the next 11 years before completing his career in the NFL.

END_OF_DOCUMENT_TOKEN_TO_BE_REPLACED

Sam “The Rifle” Etcheverry was from Carlsbad (Eddy County), New Mexico.   His father was a Basque sheep farmer who had emigrated to the area from France.  Sam was an outstanding quarterback for the Carlsbad Cavemen and has been named to the Cavemen Hall of Fame.  Sam graduated from Carlsbad High School in 1948.