Last month, Clovis High School‘s Eric Roanhaus resigned as head football coach of the Wildcats, ending a 44 year run as a coach for the school district, 39 of which he served as head coach.  Coach Roanhaus said that he had been blessed to serve with his fellow coaches, program supporters and parents of his students over this term.  Coach Roanhaus will remain in Clovis and is not retiring from the school district.  At age 69, he said that he plans to return to teaching at some level.

END_OF_DOCUMENT_TOKEN_TO_BE_REPLACED

New Mexico Military Institute, or NMMI, was founded in 1891 by Col. Robert Goss and Capt. Joseph C. Lea and was initially known as Goss Military Academy.  New Mexico had been organized as a territory of the United States under the bill known as the Great Compromise of 1850.  Under the bill, California was admitted to the Union, New Mexico and Utah were created as territories out of land gained in the Mexican War (1846-1848), these territories were allowed sovereignty in voting for or against slavery, the boundary between Texas and New Mexico was established and it made it easier for residents of so-called slave states to recover fugitive slaves.  The subject of slavery was hotly debated and this bill was the compromise reached by members of the U. S. Congress.

END_OF_DOCUMENT_TOKEN_TO_BE_REPLACED 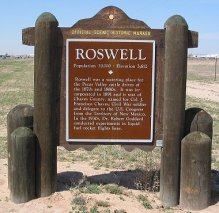 END_OF_DOCUMENT_TOKEN_TO_BE_REPLACED

The town of Belen (now in Valencia County) is one of the oldest in New Mexico having been founded around 1740 by Spanish colonists.  It is far from being the actual oldest behind Acoma and Taos Pueblo from around 1000, Zuni from around 1450, Santa Fe from 1607 and Albuquerque from 1706.  Its original name was Nuestra Señora de Belén, which is translated Our Lady of Bethlehem and was originally founded under a Spanish land grant.

END_OF_DOCUMENT_TOKEN_TO_BE_REPLACED

Tucumcari is the county seat of Quay County.  The landscape is dominated by Tucumcari Mountain, a natural feature on the east side of the town.  One might have assumed that the county name had an origin more related to the culture of the residents, but instead the county was named for a Pennsylvania senator by the name of Matthew Quay who supported statehood for New Mexico.  Because of the county’s odd layout, it borders seven other New Mexico counties in addition to Oldham County on the Texas border.